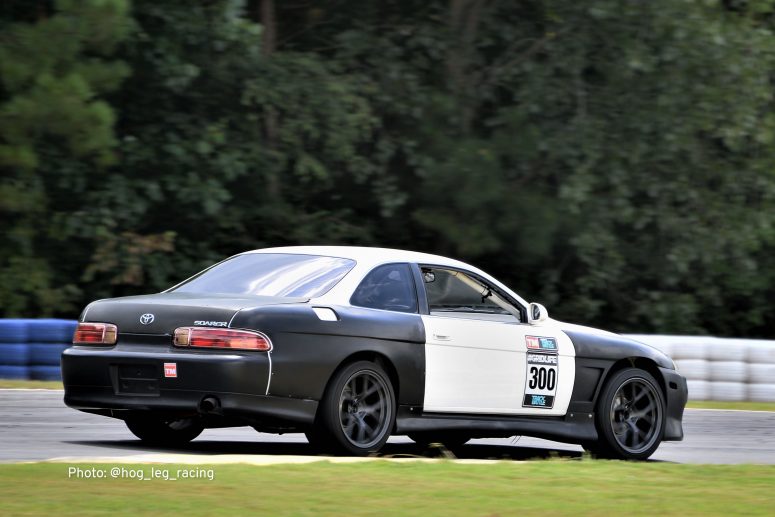 I had been aware of the #GRIDLIFE event that happened at Road Atlanta for several years, and had even covered it for MotoIQ once in the past. However I had never been as a driver with my own vehicle. 2019 would be the year that that would change — I was going to participate in their Time Attack!

The event more or less started off like any other. I spent lots of time in the week or two before the event packing things up and getting them loaded into my diesel van, making sure I had all of my ducks in a row, and then finally loading the SC300 onto the trailer and heading off to Road Atlanta. I was leaving in the middle of the day on Thursday, and the track is only about an hour from the house. #GRIDLIFE was actually a 3-day festival, and driving started on Friday. I had to wait in a big parking conga line for a little while at the track entrance before they let drivers start to pile in and set up their pit locations. After I got most of my gear and supplies unpacked the way I wanted, I waited for my buddy, Daniel, to show up. Daniel would be pit crewing for me, and mostly helping me get into the car on time, but also checking tire pressures, temperatures, and any other miscellaneous things I needed. I was very thankful to have his assistance throughout the weekend. With really nothing left to do at the track, Daniel and I got some dinner and I went to check in to the hotel and go to sleep.

On Friday the event was starting. I got to the track REALLY early, and none of the #GRIDLIFE people were even there. Unfortunately for me, I hadn’t realized that tech was open the night before, so I had to scramble a little bit in order to get my stickers on, get through tech, and then almost immediately get ready for grid. It shouldn’t have mattered much, though, because there would be ample opportunity to get track time. Or so I thought.

Because I had not established any official times with #GRIDLIFE and never had any of my own lap times yet at Road Atlanta, I waited until the tail-end of the first time attack session to get onto the asphalt and do my work. Every session is essentially a competition session, with your run group constantly being adjusted (in the next session) after your lap times are recorded. I had been given a transponder at tech, but after the first session I didn’t see any of my lap times captured. Somehow my transponder had died, despite it indicating no problems, between the time I received it at tech and the time I went out on track. Damnit strikes again.

Daniel installed a new transponder for the second session and things more or less went just fine. I was slowly picking up speed and exploring the Nankang Sportinex AR-1 tires and the handling of the car. Because of a tire puncture at a previous event, I had been running brand new sticker tires up front with slightly worn tires in the rear. The Nankangs are quite slippery before they get scrubbed in, so the second session was really where I could start to do some work.

The third session took place almost near dusk. It was really interesting to be rolling out onto track with my headlights on, and they actually did something! Since the first two sessions had mostly gone just fine, I decided to really push the “SEND IT” button and start to pick up the pace. The StopTech brakes are amazing and I still really have no idea where the limits are, as pounding the brakes didn’t seem to be causing any lockup. I still was going to explore those limits carefully.

After a few laps, coming around to set up for turn three, I stabbed the brakes in order to put some weight on the front of the car to get it to rotate and to slightly slow in order to turn in and to try to catch a little bit of the curbing on the inside right (as it is a right-hand turn). At the moment I hit the brakes, I felt a weird lurch in the front end of the car, the steering wheel jerked slightly in my hand, and I felt some slight tire lockup. I can’t quite explain the feeling, but it definitely felt awkward, and in that moment I made the decision that I should park the car instead of continuing. If something was broken in the front end I didn’t want to find out on track in the esses where the walls are quite close. I drove right off into the grass and found the safest place I could to park, and waited for rescue.

The safety crew indicated to me that everything looked OK, so I limped down one of the back-exit alley roads back to my pit. In the end, it turned out that I had broken something in the suspension, and Road Atlanta is not the place to find that out at speed on track! My weekend was done, but I had saved the entire car because of it. I’d say that’s a good trade.

If something feels horribly wrong, it’s OK to throw away a session to figure out what it is. You are much better off parking the car in a safe place on track than you are crashing and ruining things for everyone else. Track time is simply not worth that much. Since you spent so much on your car, why throw it all away just to get a few extra laps? In the long run, it won’t matter.

Drive With Erik by P.TEN Marketing - All Rights Reserved © 2018+